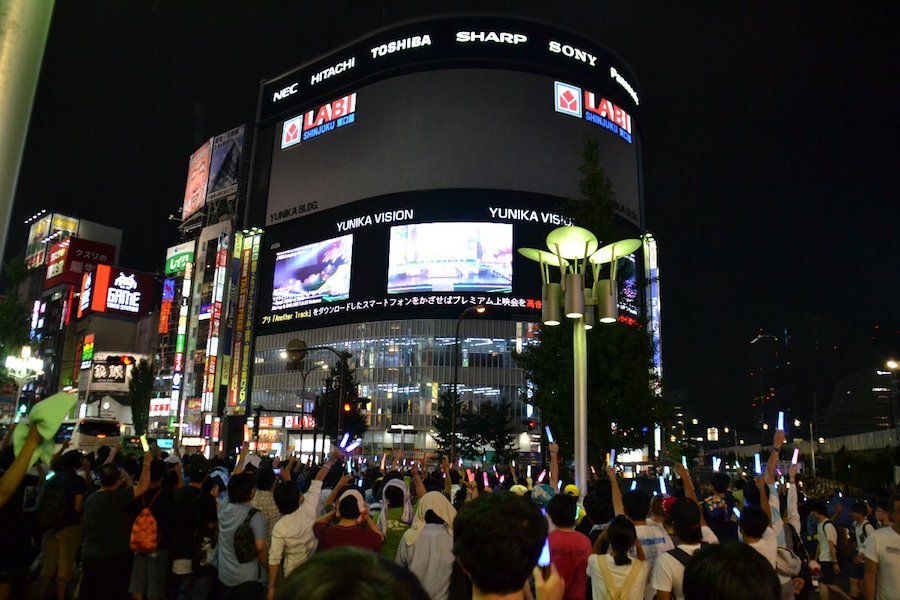 Fans began to gather from 1 hour before the screening event held at PePe Plaza in front of Seibu Shinjuku Station. Now a customary practice, the distribution of free high quality headphone rentals for the first 100 viewers reached the limited number immediately.

As the event began and Aqours members appeared on screen, a collective cheer rose from the crowd. Viewers were each enjoying the event in their own way, some focused on the live experience vision with headphones, while some were joining in with the songs with shouts and calls.
This was a first endeavor, holding 3 screenings on Yunika Vision in one day. But many repeat viewers were seen and each show increased in audience numbers.
In contrast with the darkening night and light rains lowering temperatures, the 19:00 screening reached the peak of excitement, livening up the whole area.

Possibly foreign tourists who happened to be passing by were also seen joining in on the fun. Not only fans of LoveLive! and Aqours, but many people were attracted to the event and enjoyed the festive air.

Viewer numbers for the live streaming reached approximately 25,000. Excited Tweets included "Had a great time!" "Awesome event!", as well as positive comments on the visual presentation, such as "After seeing the 3-panel display edit, I can't wait to get and see what the Blu-ray version will be like" "First time watching Yunika Vision. Interesting experiment!"

In addition, Aqours members Arisa Komiya and Rikako Aida also attended the 19:00 screening, commenting on their official Twitter accounts about how happy they were to have the chance to share the experience together with fans.

【Song List】 From "LoveLive! Sunshine!! Aqours First LoveLive! ～Step! ZERO to ONE～" the Blu-ray Memorial BOX set, which will be released on September 27, 2017, we will be screening the partial video of the live performance on DAY1 for the first time ever.