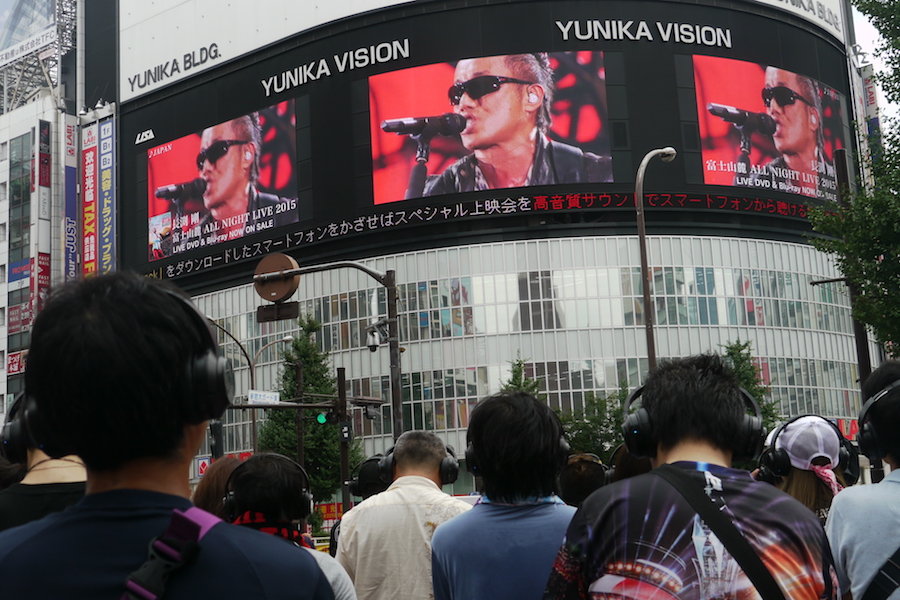 In addition to high-quality audio headphones provided at the screening, participants had an option to use Another Track, an app that allowed them to enjoy the video in high-quality audio with their own earphones. The event was also linked with VISION α, an app through which participants could participate in contest giveaways by synching it to Yunika Vision. The screening was livestreamed.

Passionate Nagabuchi fans arrived at the event venue, the PePe Plaza in front of the Seibu Shinjuku Station, wearing Nagabuchi live concert T-shirts and carrying towels and other items, drawing attention from passers-by.

When the screening began, the fans sang along with the video and reacted to Nagabuchi's audience engagement calls on video by raising their fists in the air and recreating the excitement of the live concert atmosphere.

But it was not only the fans who took part in the event. People who just happened to be walking by or who saw the scene asked to temporarily rent headphones, or just stopped to sing a few bars along with the crowd - reactions which were testament to the super star power of Tsuyoshi Nagabuchi and which reinforced his strong attraction.

Most of the fans were headed to the ONE NIGHT PREMIUM LIVE AT Nippon Budokan later in the evening, taking part in the video screening as a pre-concert pep rally to help heighten their excitement toward the concert.