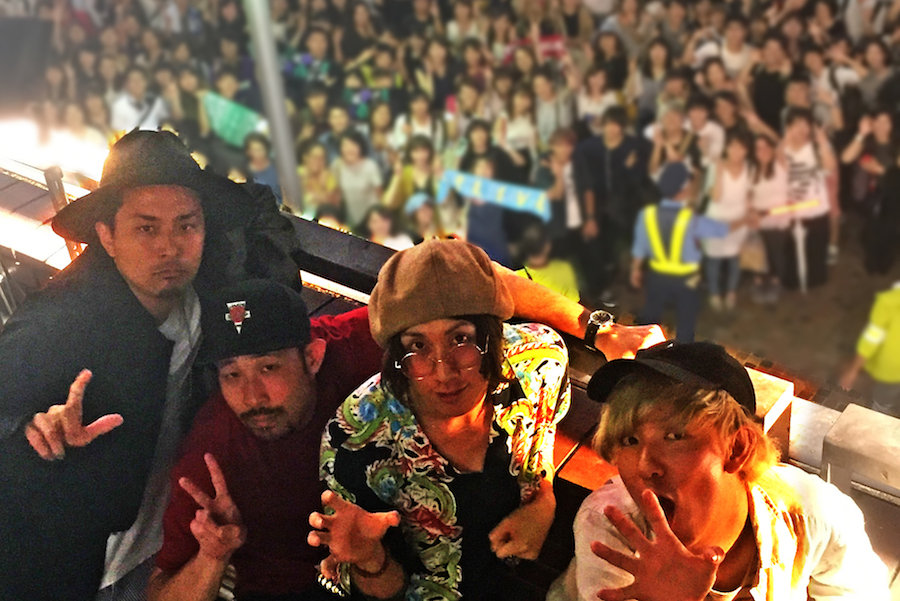 It was screened at PePe square in front of Seibu-Shinjuku Station with high-fidelity headphone rentals available for 100 viewers.
There was a long line for renting headphones 30 minutes prior to the screening, and we ran out of the 100 sets of headphones immediately.
The number of people increased even more right before the screening, and the energy from the impatient crowd was electric.

Once the screening began, the many fans who gathered seemed to focus on each and every move of the band members on screen. Some moved their bodies to the sound from their headphones, and many viewers were at the front of PePe square to enjoy the live sounds coming from the screen.
Some viewers came to the screening with friends and enjoyed the atmosphere and the reactions of passersby. It was as if they were in an outdoor live performance, and each individual enjoyed the screening in their own way.

Once the screening of the live performance was over, the YUNIKA VISION showed PePe square.
People in the square stirred up and the footage of PePe square zoomed into the terrace.
As soon as the people in the square realized that the screen was showing the band members themselves, the square erupted in cheers and there was a momentary uproar at the surprise appearance of the band.
The band members showed their appreciation to the fans who gathered by waving their hands. A commemorative photo was taken with the crowd in the background, and that photo was put on the big screen as more cheers erupted and the screening came to a close.

【Song List】 Featuring live footage from "TokainoRakuda SP ~Rakuda building~" @Hibiya-Kokaido that will be included in the First Press Limited of mini album "Mannakanokoto" will be released on September 6th(Wed),2017.