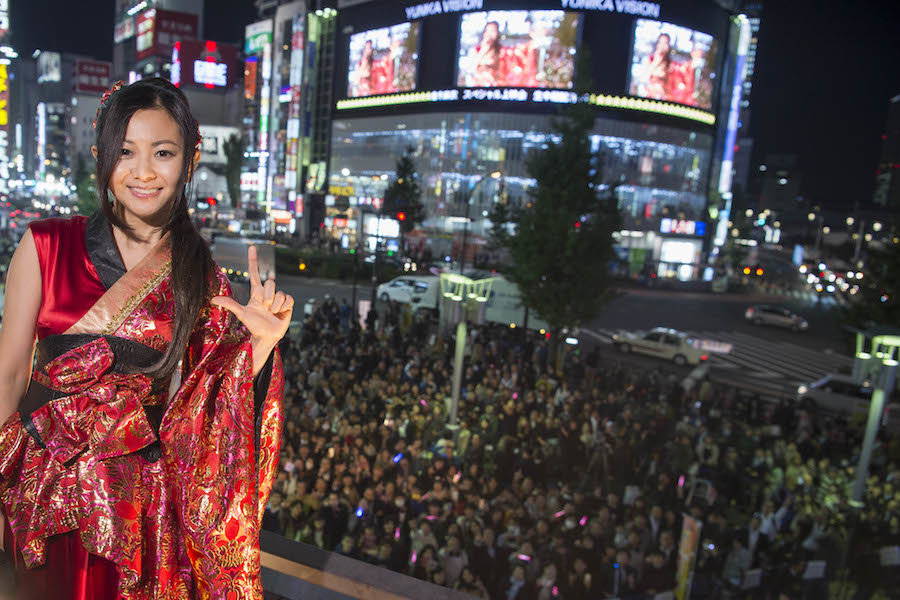 An unexpected guest takes Shinjuku by storm!
A crowd of three thousand gathers for a surprise live performance.

For around two hours from 5pm on the 24th of October, 2017, a special screening of past live performances for all 21 tracks from the album "Kuraki Mai & Detective Conan's Collaboration Best 21 - The truth is always in the song!" was held.

The event was held to commemorate Kuraki Mai and Detective Conan earning a Guinness World Record and releasing their Greatest Hits album. It opened in the Seibu Shinjuku Pepe Square, were those who had purchased a copy of the "Collaboration Best 21" album received an original logo glow stick (red) as a free gift, and by activating the AR application "COCOAR2" they were able to see a virtual Kuraki Mai. It was a one day only special event and the Seibu Shinjuku station area felt like some kind of Kuraki Mai festival.

As they often do at screening events, Yunika Vision lent out 100 headphones capable of high-definition sound to people in the crowd.
The surprise of so many people listening to such a high level of sound quality could clearly be seen.

Once the screening event started, Kuraki Mai appeared in Vision to say "Everyone, enjoy the show!" just as the videos began.
First up was "Secret of my heart", which is not only one of Kuraki Mai's biggest hits, but was also her first collaboration with Detective Conan. Fans in the crowd were could barely tear their eyes away from Vision, and the glow sticks they had just got their hands on were swaying in the air. Many were getting into the music as if they themselves were synchronized with the video stream.
The 21 songs, which earned Kuraki Mai the Guinness World Record for "most animated show theme songs by a single artist", were played for around an hour and a half, which included a tri-screen edit exclusively available through Yunika Vision. Fans at the event found themselves captivated by Kuraki Mai all over again.

But the real climax of the day was yet to come.
After the screening had ended, Kuraki Mai re-appeared in Vision to say "I think I might come and see you all since you all came to see me.", which was met by a roar from the crowd. She then said "Everyone, countdown! 5, 4, 3, 2, 1..." which was followed by the huge collective countdown by the audience, and when Vision showed Kuraki Mai at the Seibu Shinjuku Terrace, the crowd went wild. 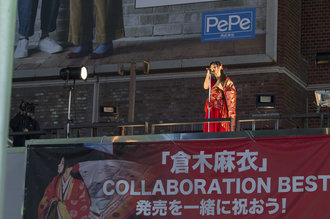 The cheering of the crowd didn't even stop when the intro to "Togetsukyou - Kimiomou" started playing. When Kuraki Mai started singing, people commuting in the area started asking "Is Kuraki Mai here!?" as her voice echoed all around Shinjuku. It was right around the time that a lot of people making their way home, and so many stopped to check it out that the event area was packed in no time at all.

When Kuraki Mai had finished her first song she addressed the crowd saying "Everyone, are you surprised? Just listen a little longer." before breaking into "Secret of my heart" followed by "Always". All the commotion pulled in more and more people, and according to an official announcement, Kuraki Mai ended up giving her surprise performance to a crowd of three thousand.

Kuraki Mai finished her three-song set and gave her thanks to her crowd, saying "This is like a dream. Thank you all so much for today." and stayed around to take photographs with her fans. Those photographs were broadcast through Vision to mark the end of the wildly successful special screening event.

Also, the live broadcast was streamed through the Yunika Vision homepage as well as Twitter and Facebook, and the instant messaging feedback from fans who couldn't make it to the event included "That event was awesome!" and "I'm so jealous!"