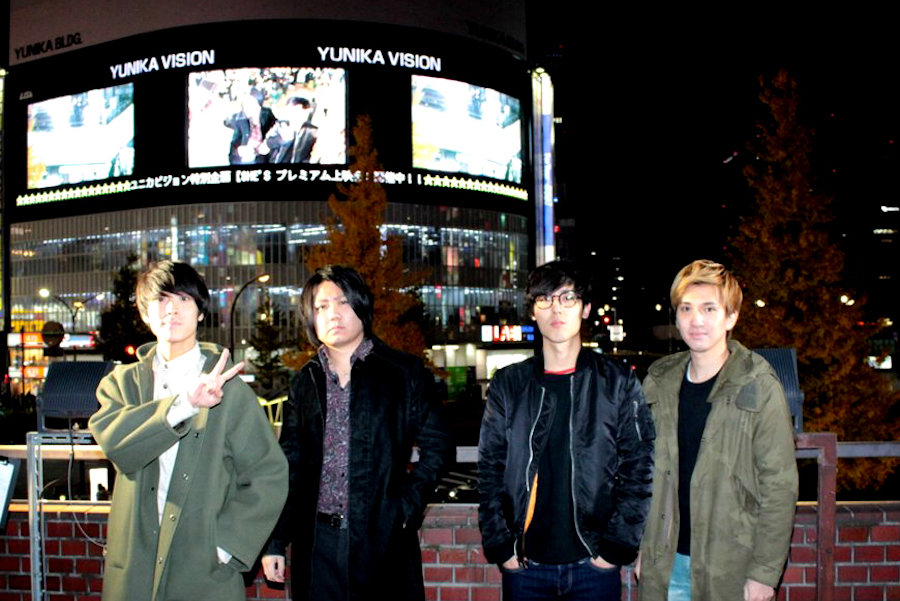 From 8:00 PM on December 2, 2017, a 1-hour premiere event was held presenting SHE'S live performance video from Sogetsu Hall in Tokyo.

Seibu Shinjuku PePe Plaza as the event venue, free headphone rentals limited to the first 100 viewers were made available to enjoy the screening in high-quality sound.
Excited and enthusiastic fans were already gathered for the distribution of rental headphones which began 45 minutes before the screening.

The event began with SHE'S members appearing on the Vision screen with a message to their audience. "With the additional string section, our live performance video will let you get into the SHE'S world more than ever before. So, please enjoy the screening event."

As the video began, some fans took off their headphones to compare the sounds coming from the Vision screen, while others were talking with their friends as they enjoyed the event. But most fans were focused on the music and visuals. As the band members had commented, the stage composition of additional strings with the band performance brought out the grand SHE'S world. With each song, the gradual swelling of excitement from the fans could be seen.

Along with this live performance video, the "Flare" music video was also shown for the first time. Screened without prior notice, fans could be seen exchanging surprised glances, sharing their excitement as the music video started.

As the live performance and music video screening ended, the band members once again appeared on screen to comment, "Everybody came all the way here for us, so why don't we head on over, too?"
Fans first seemed puzzled, but soon cheered loudly as they saw SHE'S members appearing on the Vision screen, waving at fans from the PePe Plaza terrace.

"We hope the excitement from the live stage came through. Thank you very much for coming in this cold weather!" the members expressed their gratitude, and with fans at the plaza as their background, took a commemorative photo together. The event came to a close with the group photo presented on the Vision screen.

Also, a surprise present was gifted to 5 randomly selected viewers who had rented the limited headphones. The lucky viewers were given the chance to take individual photos together with SHE'S members.
The selected 5 fans seemed somewhat nervous as they were led by staff, but burst with joy upon meeting with the band members. Joined with SHE'S accommodating and fun reception, the photo session was held in a friendly atmosphere.
As the session came to an end, some thanked the staff, saying, "This is going to be one of my best memories!" The fans heading home with bright expressions was a touching sight.

【Song List】 Featuring live footage from "SHE'S Hall Tour 2017 with Strings〜after awakening〜" @Sogetsu hall that will be included in the First Press Limited of 2nd Album "Wandering" will be released on December 6th (Wed),2017.