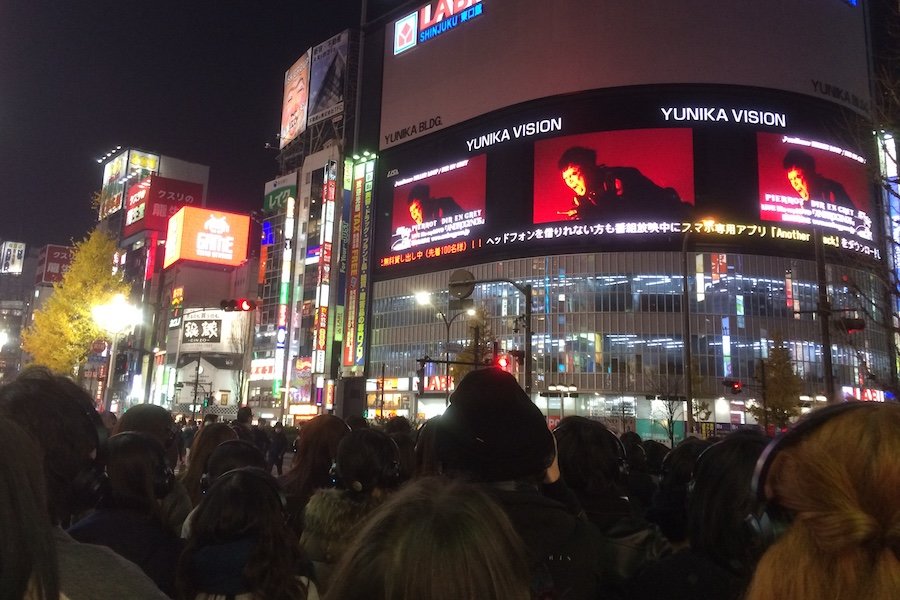 Fans assembled for a joint performance by the two charismatic bands. The "ANDROGYNOS" screening was a success filled with excitement.

To see this joint performance by the two charismatic visual-kei bands, enthusiastic fans gathered to receive free-rental headphones, which allowed for a high-quality listening experience (limited to 100). When asked by staff whether they were here for headphones, some even laughed and talked about how there was no way they'd miss watching this amazing live performance.

The screening started with PIERROT's live performance. For the fans attending, the songs played were probably ones they had heard hundreds or even thousands of times. But apparently, hearing them in the streets of Shinjuku provided a different experience, and you could see people taking off their headphones to enjoy the live performance alongside the hustle and bustle of Shinjuku.

As the video began, some fans took off their headphones to compare the sounds coming from the Vision screen, while others were talking with their friends as they enjoyed the event. But most fans were focused on the music and visuals. As the band members had commented, the stage composition of additional strings with the band performance brought out the grand SHE'S world. With each song, the gradual swelling of excitement from the fans could be seen.

Along with this live performance video, the "Flare" music video was also shown for the first time. Screened without prior notice, fans could be seen exchanging surprised glances, sharing their excitement as the music video started.

As the night continued, even more spectators arrived once the live film for DIR EN GREY began. With the "Another Track" app allowing for enjoyment of high quality sound using one's own earphones, you could see people having fun finding the ideal position to watch the show while listening on their smartphones.

Many fans stayed after the one-hour screening ended, with some staring at the screen for so long that the staff members had to call them over to collect the headphones.

There were also people attending who had participated in the same-day screening for OLDCODEX. On Twitter, there was a tweet reading "I like OLDCODDEX, and my husband is a DIR EN GREY fan. Thanks so much for the great day.

Moreover, the screening of the music show was also streamed live, which allowed many fans who were unable to come to the venue to participate in the stream.