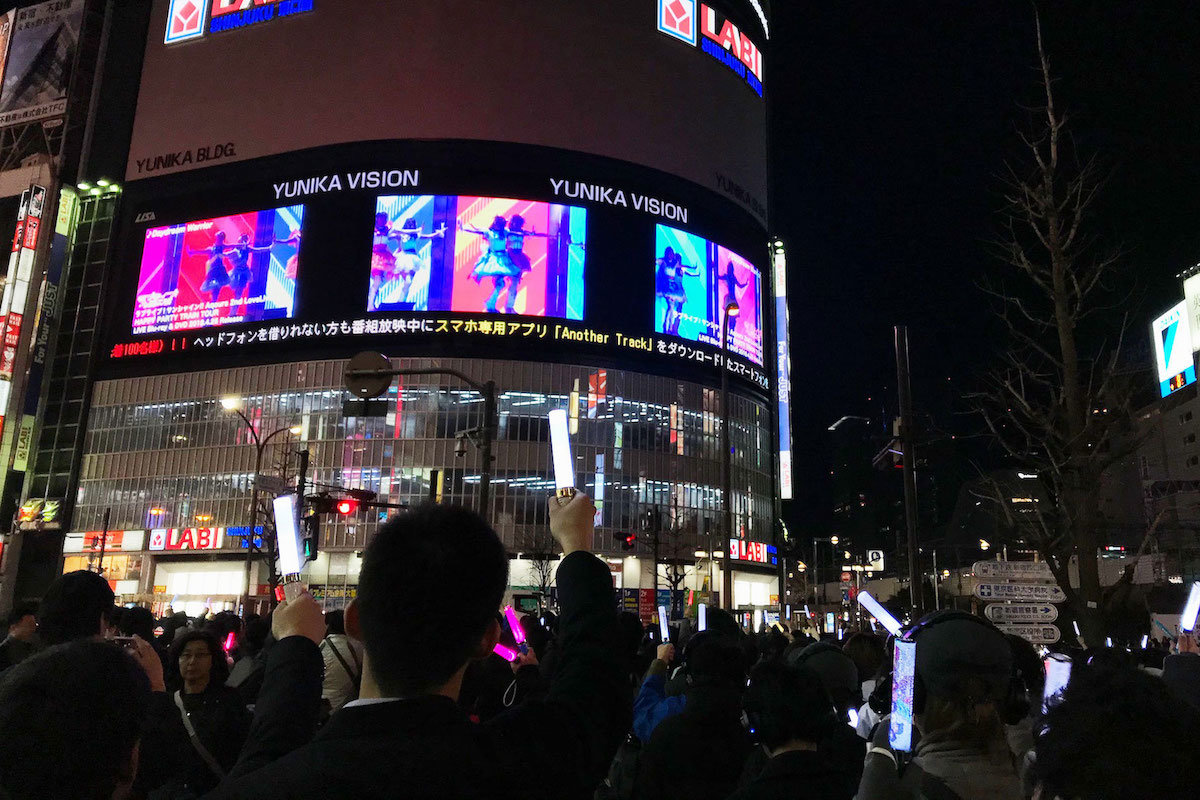 March 17th at 5 pm & 7 pm, We were held a premiere screening featuring new footage of live performance by Aqours from "LoveLive! Sunshine!! Aqours 2nd LoveLive! HAPPY PARTY TRAIN TOUR", That was a headphone-viewing event to watch the screening in high quality sound and enjoy live streaming of the event.

Previously, Yunika Vision held a similar event for Aqours 1st LIVE in August 2017, airing never-before-seen live clips. Once the Love Live! event was announced via Twitter, the internet was buzzing immediately with comments from fans, cheering and declaring, "So much YES! Yunika Vision!", "Will definitely be there this time".

Reflecting the enthusiastic web response, on the day of the screening, likely Love Live! Fans started to gather in front of Yunika Vision (Seibu Shinjuku Station PePe Plaza) 1 hour prior to the event, and the free headphone rentals for the first 100 viewers immediately ran out. The number of fans kept growing as the starting time drew near, changing the entire PePe Plaza into a live venue buzzing with feverish excitement.

The screening event kicked off with the track, "HAPPY PARTY TRAIN". With the Aqours members making an appearance on stage in sync with the animation on screen, the heat went up a notch at PePe Plaza. The enjoyment was palpable, with fans seen clapping and dancing with the songs, immersing themselves into the virtual live experience.
Since the set-list was not announced prior to the event, the crowd stirred with calls of surprise and delight as each track began playing. But the fans' energy level reached a fevered pitch with the shift from "Daydream Warrior" to "Thrilling Oneway". Cheers were heard throughout the plaza as the first showing came to a close.

As a Yunika Vision screening event, the first show seemed to have already reached the peak of excitement. But, the second screening assembled an even bigger crowd of fans. From the opening track to the last song, the 43-minute screening event was inundated with cheers from fans, a continual show of energy and elation.
Surprised by the commotion, passersby couldn't help but glance at the Vision screen. Foreign tourists were especially drawn in, happily capturing the event on their mobile devices. An unprecedented sight, a street corner in Shinjuku had transformed into a live festival stage.

The live streaming was also visited by numerous viewers, receiving delighted comments regarding the first-even shown live clips, including "Can't wait to get the 2nd disc!" and "3 members on each of the 3 screens was beautiful in 'Daydream Warrior'".