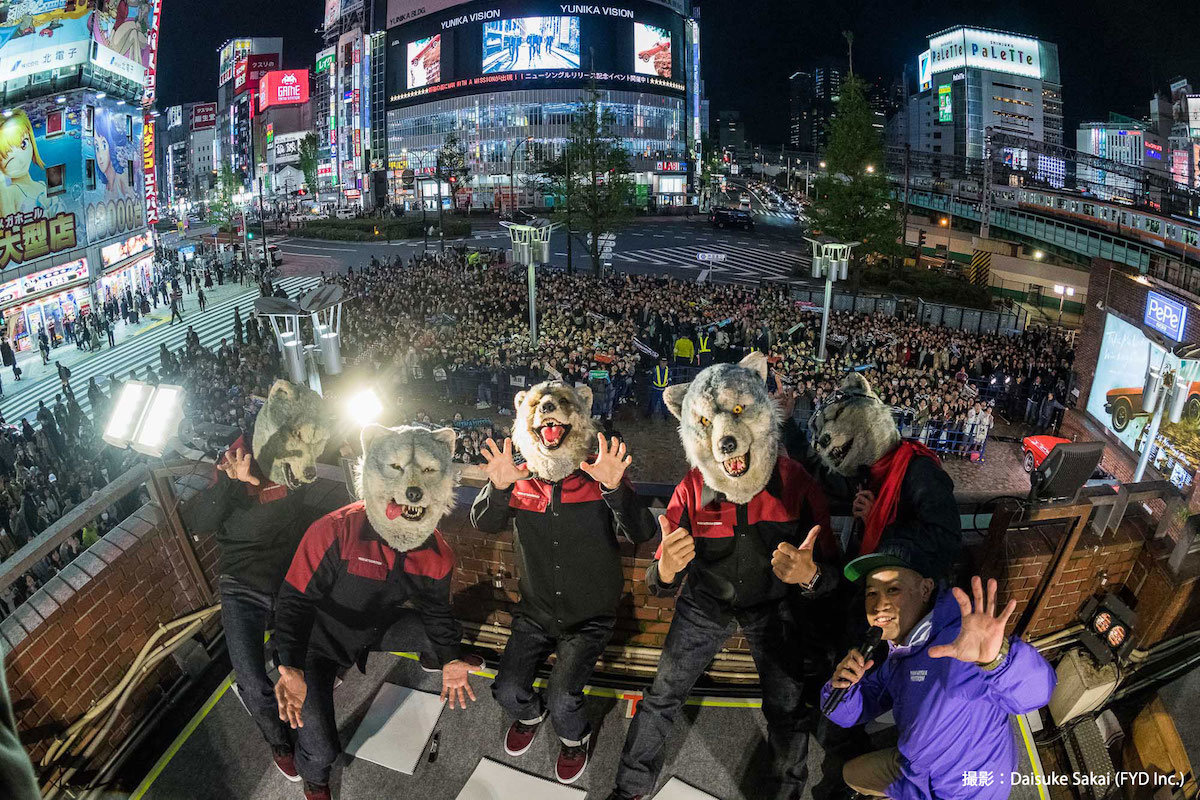 Band members appear to an awaiting crowd of 3,000! Fans delight in the unprecedented stage of MAN WITH A MISSION screening event

April 18th (Wed.) at 8:00 pm, We were held a MAN WITH A MISSION special screening and talk event of their.
And, that was also available live streaming.

At around 20:00 on the day of the event, 1,000 people were already gathered at the Seibu Shinjuku PePe Plaza venue 30 minutes before the special screening, reflecting the ever-rising popularity of MAN WITH A MISSION.

At 20:30, guitar & vocal, Jean-Ken Johnny, and Shiiku Sukio, MAN WITH A MISSION's 'handler', suddenly appeared live on the Vision screen.
After announcing "Good evening, humans! I am currently heading to a certain place," Jean-Ken Johnny and Shiiku Sukio began a mini talk show in a red Mustang - part of the cover artwork for their new single - while driving through the Shinjuku streets. As MWAM's new track "Take Me Under" is the theme song for the movie "Inuyashiki" set in Shinjuku, their talks ranged from how Yunika Vision appears in the movie, the screening event, and behind-the-scenes episodes from their recent UK tour. 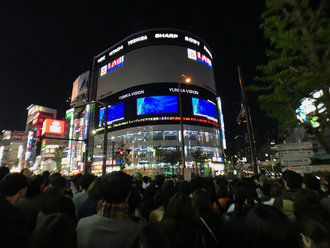 During their talks, it was revealed that live clips from their London show will be shown for the first time on Yunika Vision. With an intro "So, please take a look at this clip" from Jean-Ken Johnny, the Vision screen switched to the performance footage.
With no Japanese fans appearing in the audience at the London show, the clips conveyed the raw energy of a local gig. The never-before-seen footage captivated the fans gathered at PePe Plaza.

But suddenly, there was a big stir just as the live clips were about to end. The reason for the commotion was the appearance of the other members, Tokyo Tanaka, Kamikaze Boy, DJ Santa Monica and Spear Rib from the PePe Plaza terrace, immediately heating up the venue with excitement.

As the band members waved to their fans and clowned around, a bigger cheer arose. The red Mustang that was seen on the Vision screen before with Jean-Ken Johnny was now driving through the crowd. As it arrived at PePe Plaza, wild cheers from gathered fans had reached its peak.
Once joining with the other band members waiting on the 2nd floor, the MAN WITH A MISSION and Shiiku Sukio talk show began. 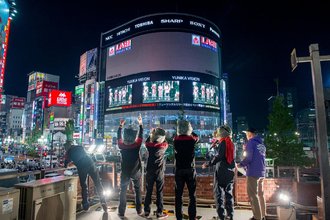 A monitor was set up beside the members who had gathered at PePe Plaza, which displayed "MWAM COUNTDOWN".
Apparently meaning the "countdown until the announcement of a major event," members, apart from Jean-Ken Johnny, who were unaware of this announcement, were asked to write their guesses on a flip board as to what the event was.
Getting only bizarre answers such as "A timer for cup noodles" (Kamikaze Boy) and "Release date of Play Station 5" (Spear Rib), Jean-Ken Johnny gave a hint that it was a countdown until the announcement that reveals the place where they would be performing. However, the off base responses continued, like "on Saturn" (DJ Santa Monica) and "at my house" (Tokyo Tanaka), with no one reaching the right answer. Inevitably, the fans were told that the proper answer will be revealed on the band's official site at 10:00 on April 24.

The music video from their latest single "Take Me Under" was shown at the end, and as the gathered fans enjoyed a photo shoot with MWAM, the event came to a close while still buzzing with excitement.