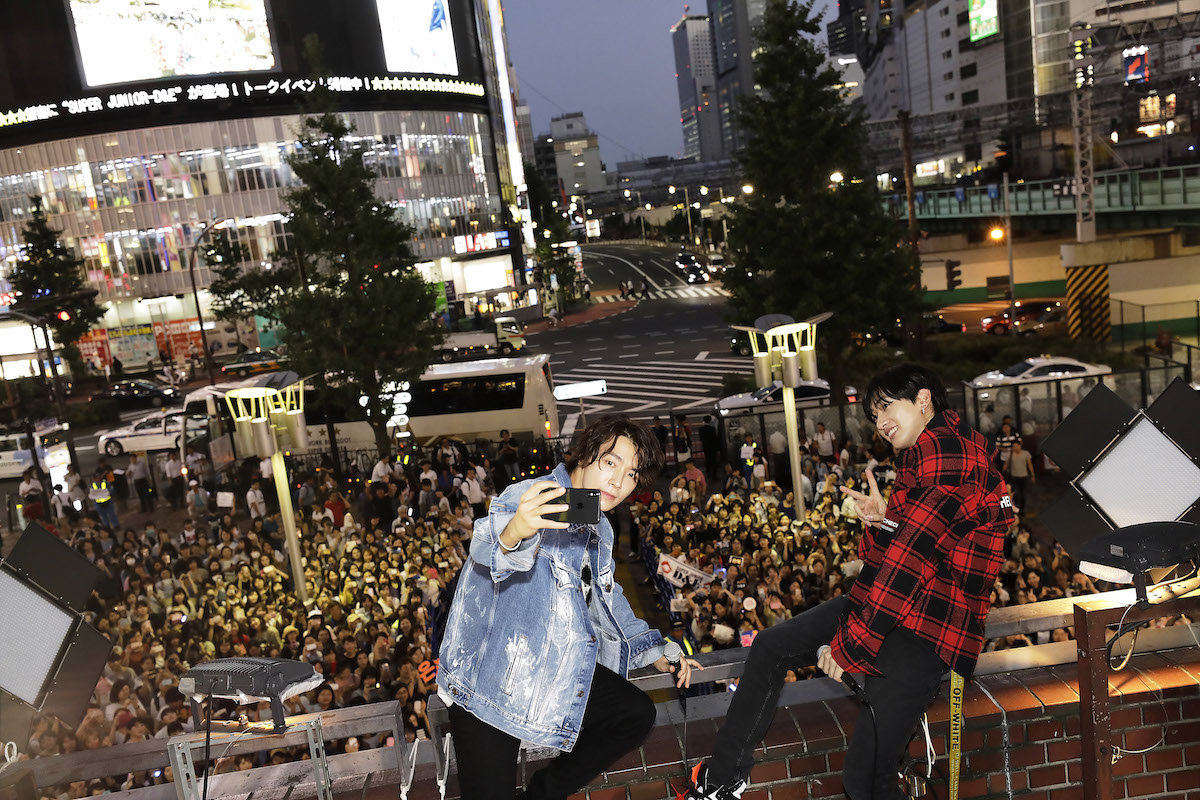 3,000 fans scream in delight after receiving a surprise visit from the members,
It's a special, joy-filled screening in Shinjuku.

We were held a special screening featuring live footage of SUPER JUNIOR-D&E and talk event of their.
And, that was also available live streaming.

On the day of the screening, the venue at SEIBU SHINJUKU PePe Front Square filled with fans, and since Donghae and Eunhyuk 's names appeared in the space, many came carrying D&E merchandise.

The screening started with live footage from "MOTORCYCLE."
The fans all enjoyed the big-screen performance of D&E in their own unique way. Some fans conversed with their friends while watching. Some fans used the Another Track smartphone app to get lost in the performance, and others uploaded photos of the VISION screens to social media.

As the screening took place on a weekday, more people continued arriving after 6:00 p.m. By the time the ninth live video finished and the music video for "Here We Are" began, the audience had doubled in size. It looked like an outdoor music festival, with people dancing along to the music. In addition, the music video for Polygraph debuted as the final track in the screening. Many fans seemed fascinated by the video's incredibly refined visuals.

However, the climax had yet to begin.

Once the music videos finished, both Donghae and Eunhyuk appeared once again on the VISION screens. "Today's a special day, so we're going to come out and meet you!" As they said this, the square went crazy. When the two came out, high pitched screams erupted from the 3,000 fans.

The two exchanged call and response greetings with the fans, then began chatting with the MC for the talk show portion of the event.

Donghae and Eunhyuk answered the MC's questions. When asked about his favorite Japanese phrase, Eunhyuk responded with the call waiting message: "The number you dialed is currently unavailable. After the 'beep' sound..." Laughter spread throughout the square, and the mood grew more cheerful for the remainder of the event.

Asked about their excitement for the upcoming September tour, Eunhyuk said "I plan to capture everyone's hearts on this tour," while Donghae responded with "I'm going to do my best to prepare for all of you. I hope you'll support us!" A big cheer erupted from the square. 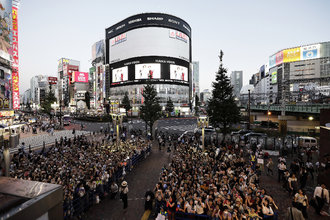 Adding to the fun, Donghae and Eunhyuk took a commemorative photo with the fans, which was shown on the VISION screens. The fans were delighted at their response, with Eunhyuk exclaiming "Everyone's so pretty!" and Donghae saying "You're all so bright and cheery I can hardly open my eyes!"
They left the square with "Sunrise," as the fans joined in for the chorus. There was joy in the air as the screening concluded. 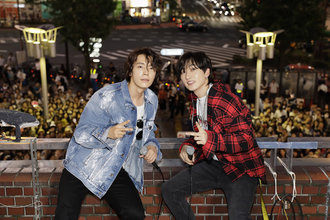 In addition, with both members popular overseas, there were many English comments about the screening on social media, with messages such as "Watching from Australia. Thank you," and "I love you D&E from Indonesia." Fans that couldn't make it to the event were still able to enjoy it.

【Song List】 We will introduce uncut versions of 13 music videos, including live footage and never-before seen videos of SUPER JUNIOR-D&E.