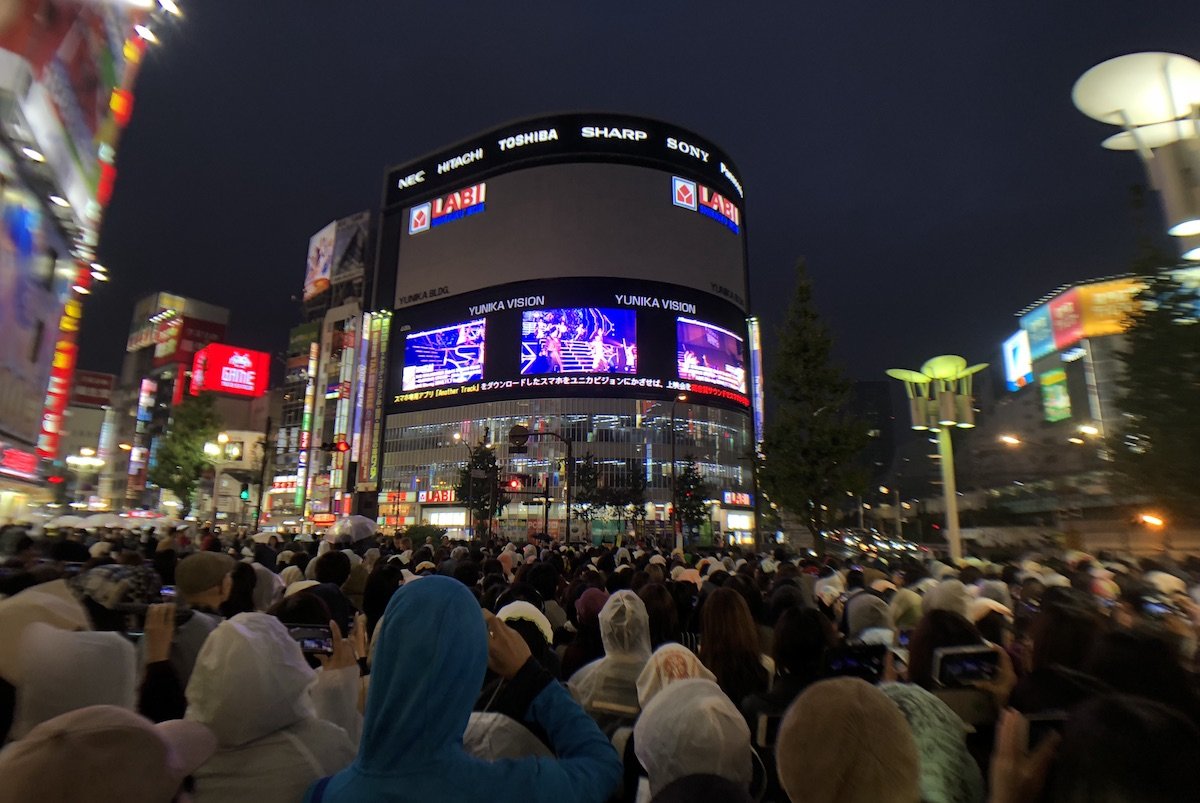 Unique among the Idol Master idol creation games, Idol Master SideM launched in 2014 as a social media game for producing male idols. We held a screening in advance of the official video release of THE IDOLM@STER SideM 3rdLIVE TOUR ～GLORIOUS ST@GE!～, a live event featuring the singers who play the characters in the game.

[November 3rd (Sat.) DAY 1]
When event staff were preparing for the special screening in SEIBU SHINJUKU PePe Front Square, enthusiastic producers (the nickname given to IDOLM@STER fans) had already gathered in the viewing area even though there were still at least 2 hours until the start time.

After the Vision screens announced it was 17:00, the unique atmosphere off by the excited producers filled the square, and delightful cheers rose from the crowd as the 46 cast members appeared for the first song of the screening, "Reason!!"
For the special screening, the songs for each unit were played one after the other, and cheers could be heard from around the square every time a song changed. Naturally the producers that were there each supported different members and had their own way of cheering and enjoying themselves depending on the unit. There were also many male fans in addition to female ones participating in the screening, giving a glimpse at the richness of the IDOLM@STER world.

[November 4th (Sun.) DAY 2]
Perhaps it was because of all the excitement from the previous day, but event more people than yesterday packed PePe Front Square in front of Seibu Shinjuku Station even though it was supposed to rain.
While the number of people who gathered was beyond imagination, the good manners of the fans really stood out, with many voluntarily posting on social media that "bring a raincoat because using an umbrella would block other's view," and everyone in the square followed the event staff's instructions to not crowd the surrounding area.

Just as on Day 1, the second day of the special screening started with the entire cast performing "Reason!!"
As each of the cast members appeared on the screen, the fans in the square roared together with the audience shown on the Vision screens.
Fans could be seen waving pen lights and moving their bodies to the music, and enjoying themselves at the screening in their own way. And maybe because it was the second day, PePe Front Square felt even more like an open concert space than on Day 1.

People passing by stopped when they saw the nearly 2,000 people gazing at the Vision screens, and some said "What's going on? Is that IDOLM@ASTER? Isn't it amazing?"

At the end of the second day of the screening, the 16 members performed the finale of "DRIVE A LIVE," and the special screening ended to the sound of thunderous applause throughout the venue when the song was finished.
Producers has memorable smiles as they formed groups to talk about their impressions after the screening.

Just like the first day, the second day was also big news on social media, and many who probably first heard about Yunika Vision through this said, "Those 3 screens " A total of 4,000 fans gathered in two days.