Schedule
Sat, 1st May – Mon, 31st May
Time
Five minute from 9am
※Starts at 9pm after the declaration of a state of emergency is canceled.

A new video work by David Hockney, one of the world’s most celebrated living artists, will be unveiled across a network of the world’s most iconic outdoor video screens in London, New York, Seoul, and Tokyo this May. The global collaboration was curated by Josef O’Connor, Founder and Artistic Director of CIRCA, an innovative new platform showcasing digital art in the public space.


David Hockney, said: “What does the world look like? We have to take time to see its beauty. That's what I hope my work will encourage people to do when they see it on the large screens.”

The new video, titled Remember you cannot look at the sun or death for very long, will be shown every evening throughout the month of May at the following times and locations:

London: Piccadilly Lights, at 20:21BST
New York: Times Square, at 23:57EST
Seoul: Coex K-POP Square, at 20:21KST
Tokyo: Yunika Vision, Shinjuku at 09:00JST
*starts at 21:00JST after the declaration of a state of emergency is canceled.
Online via the CIRCA.ART website every evening at 20:21BST 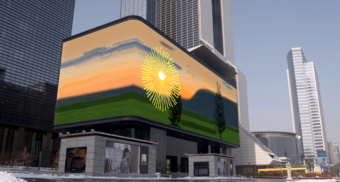 
Josef O’Connor, Artistic Director, CIRCA, said: “There has never been a better time for this shining image of hope, which links people across borders and continents to celebrate the arrival of spring. We are especially grateful to David Hockney, a master in exploring the boundaries of new media, for allowing CIRCA to present his work in such a bold and democratic way, connecting Piccadilly Lights with screens in America, Japan and Korea” 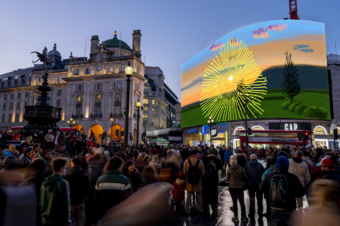 
ABOUT CIRCA
Created by artist Josef O’Connor, CIRCA commissions a different artist each month to present new ideas that consider our world circa 2021. Each artist is invited to create a new work for Europe’s largest screen that offers an innovative and exciting way for people to engage with art, both outside and online, in a safe and socially distanced way. Hockney’s work will pause the adverts on London’s Piccadilly Light’s screen at 20:21BST, a new time for 2021.

Visitors to Piccadilly Circus can connect their headphones to WWW.CIRCA.ART and receive a fully immersive audio-visual experience. The website also streams the artwork every evening at 20:21BST and hosts supporting content alongside past archives of CIRCA commissioned work from artists including Patti Smith, Tony Cokes and Ai Weiwei.

ABOUT DAVID HOCKNEY
David Hockney (b. 1937) is one of the world’s most influential and celebrated living artists. From the 1960’s, when he first burst onto the art scene in London, he has remained a significant force in the art world, not only for his paintings, drawings and printmaking, but also for his interrogation of photography and new media in addition to stage design. Long associated with recording life in Los Angeles, the past two decades have seen a re-engagement with the European landscape and the natural world.

In 2009, David Hockney began expanding his practice from a decades-long reliance on analog mediums to that of iPad drawings. What began as drawing with his thumb on an iPhone quickly shifted to drawing with a stylus pen on the newly released iPad: “There was great advantage in this medium because it’s backlit and I could draw in the dark. I didn’t ever have to get out of bed,” 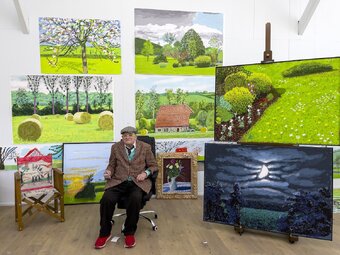 OFFICIALSITE
Back To INFORMATION TOP
Back to Page Top