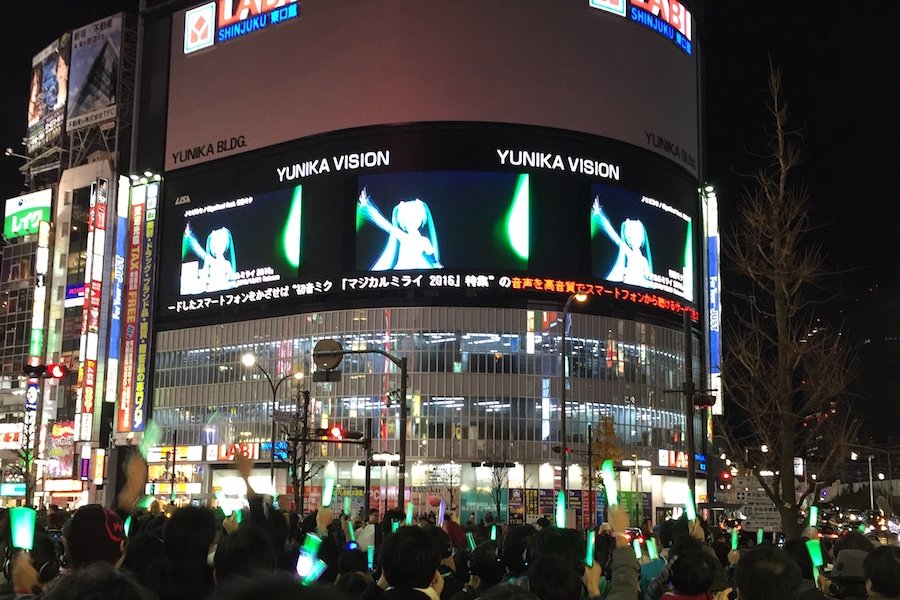 Fans decked out in Hatsune Miku regalia assembled at PePe Plaza in front of Seibu-Shinjuku Station, the event venue. The free headphone rentals for the first 100 viewers immediately ran out.

Once the screening began, the air quickly became energized at the venue. Gathered fans got into the music, cheering and shouting in sync with the tracks. A street corner in Shinjuku transformed into a lively open-air stage.

As a special feature, this screening event was also linked to the just-released Another Track smartphone app.
Providing high-quality sound through smartphones synchronized with Yunika Vision, the Hatsune Miku screening became Yunika Vision's Another Track launch as the first app-linked event.
Viewers who had downloaded the app to their smartphones seemed amazed by Hatsune Miku's voice coming through their earphones and thoroughly enjoyed high-quality sound together with the images on Yunika Vision.

The Twittersphere was also abuzz with delighted comments, including "It's like being at a concert!", "So cool partying in the middle of the city!", "How moving it is to gaze upon Miku on a metropolitan mega screen," bringing the event to a successful end.