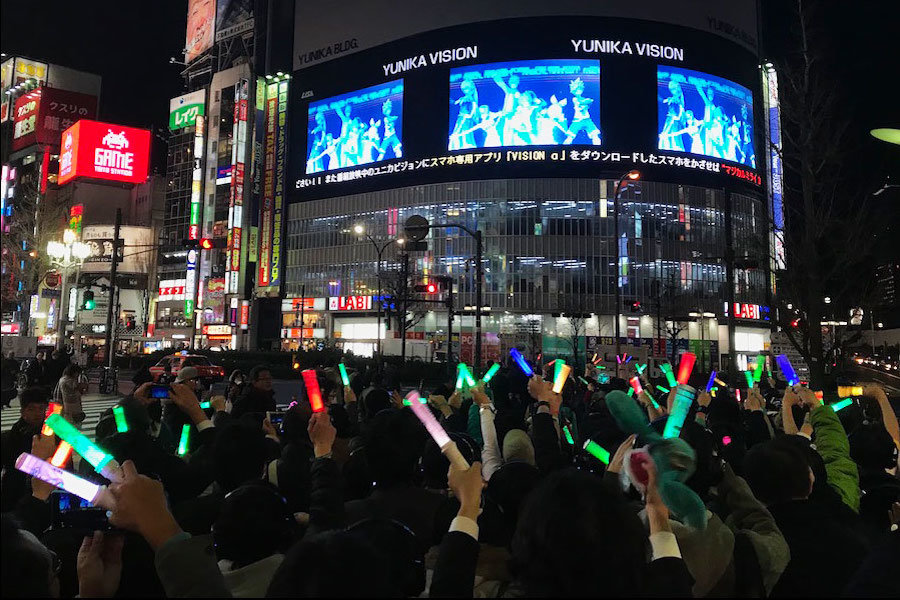 On this January 10, Hatsune Miku "Magical Mirai 2017" was screened twice, first from 6:00 p.m. and then again from 8:00 p.m.
The gathering scene included a headphone listening event enabling guests to tap into superior sound quality, and a live streaming.

"Magical Mirai 2017" marks the fifth holding of this themed exhibition and live event fusion geared to furnish interaction with the creative culture of "Hatsune Miku".
With the special showings on the Yunika Vision big screen having also gained traction as a regular happening, the cyber waves were buzzing with speculation even before any announcement of the screening. Namely, "Is Magical Mirai going to be held at Yunika Vision again this year?" As it turned out, the evening saw event site SEIBU Shinjuku PePe plaza packed with hardcore fans toting a vast array of Hatsune Miku goods.

When the screening commenced, the assembled crowd grew instantly absorbed in the live performance ambience, clapping along and waving glowing Cyalume sticks in the air. Donning the Hatsune Miku figures specially toted to the site, some snapped selfies against the screen, while others concentrated solely on the music springing from headphones and likewise delighted in the scene as they pleased.
During the "Melt" - "Sand Planet" - "DECORATOR" sequence during the latter half of the screening, the voltage of the devotees surged to even greater heights, with the dancing of the richly colored Cyalume sticks transforming the SEIBU Shinjuku PePe plaza into utterly fantastic space.

The 6:00 p.m. screening came to a close, with the 8:00 p.m. show startup coinciding with large numbers of people dropping by on their way home from work as it was a weekday. That element overlapped with repeaters from the earlier show, further swelling the ranks of the crowd and fueling the fever of the site.
Numerous passersby also halted in their tracks as they peered to see what was going on, with overseas tourists especially thrilled by the rare scene. Many went beyond just snapping photos to voice the desire to check out headphones, joining in to enjoy the event side by side with locals.

Considerable numbers of people also participated in the live streaming on the Yunika Vision website, Facebook page and Twitter. The airing on Twitter, which is equipped with a chat function, emerged as a particularly lively hub of comments flying back and forth. Remarks posted from overseas included: "It was fun. Hope I can be there someday to see some Vocaloid videos on the big screen".

With the decision having been made to hold "Magical Mirai" again in 2018, after the screening came to a close, many guests heading homeward commented to staffers along the way: "This year's event was great again. We're really looking forward to coming back next year too!"