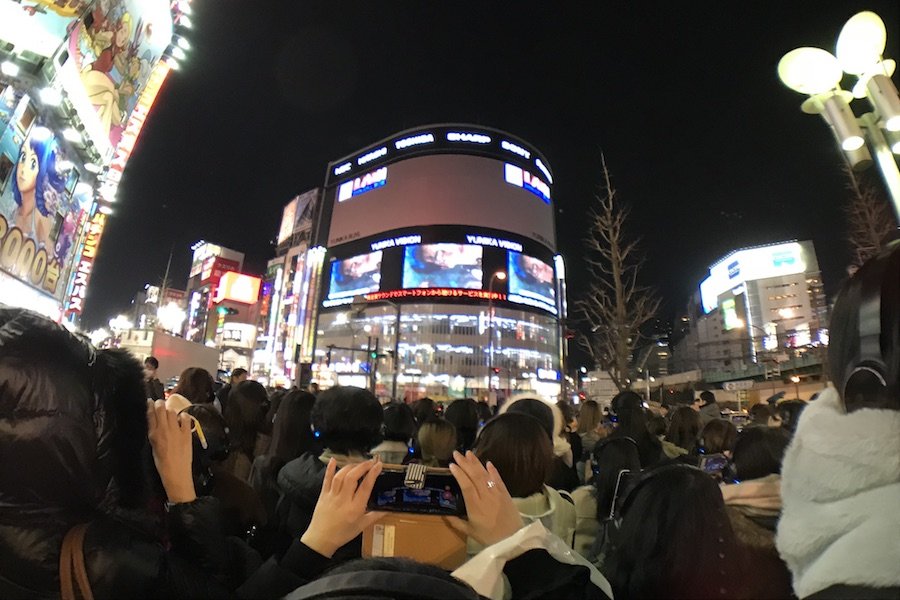 The night of the Super Blue Blood Moon.
EXO screening in the middle of Shinjuku drew massive attention.
More than 40,000 watched the live stream.

There were special screenings of the concert film EXO PLANET #3 - The EXO'rDIUM in JAPAN and the music video Electric Kiss on January 31, from 18:00 and 20:00, each lasting 33 minutes.
The viewing event included high-sound-quality headphones and live streaming of scenes of the screening.

The day of the screening was also total lunar eclipse for the first time in 3 years that can be seen in Japan, and the day JPAN 1st ALBUM "COUNTDOWN" went on sale, so the crowd was full of fans holding Tower Records bags and new EXO merchandise.

As soon as the screening started and the live video began running, the audience fell into the event, with some filming the VISION on their smartphones and others dancing with the music. The last half of the performance was especially powerful as the audience sang along with the band, filling the venue with the sounds of joy.

More fans showed up as the 18:00 showing ended and the 20:00 showing approached, and even passersby stopped to see what was causing such passionate uproar.
Those passersby, wanting to know what was going on, borrowed headphones and took in the show. The quality of the headphones and the power of EXO's performance blew them away, many saying "The realism is incredible! EXO is so cool! I'm a fan now!" as they eventually left.

Every time YUNIKA VISION has a special screening, passersby stop to join in. However, this time we especially noticed tourists from all over, particularly Asia, watching the show and chanting "EXO, EXO!" After the show YUNIKA VISION's social media accounts advertising the event were flooded with comments in English. This really drives home once again how EXO's popularity is growing worldwide.

Also, the live streaming shown on YUNIKA VISION's website, FaceBook page and Twitter account had watchers from not only Korea, but the US, Russia, Indonesia, the Philippines and many more around the world. The total viewers for both shows equaled over 40,000 people.
On Twitter, people were saying things like "YUNIKA VISION is Tokyo Dome! " "The 3 different screens were awesome!" so clearly, people really enjoyed this video experience only YUNIKA VISION can provide!