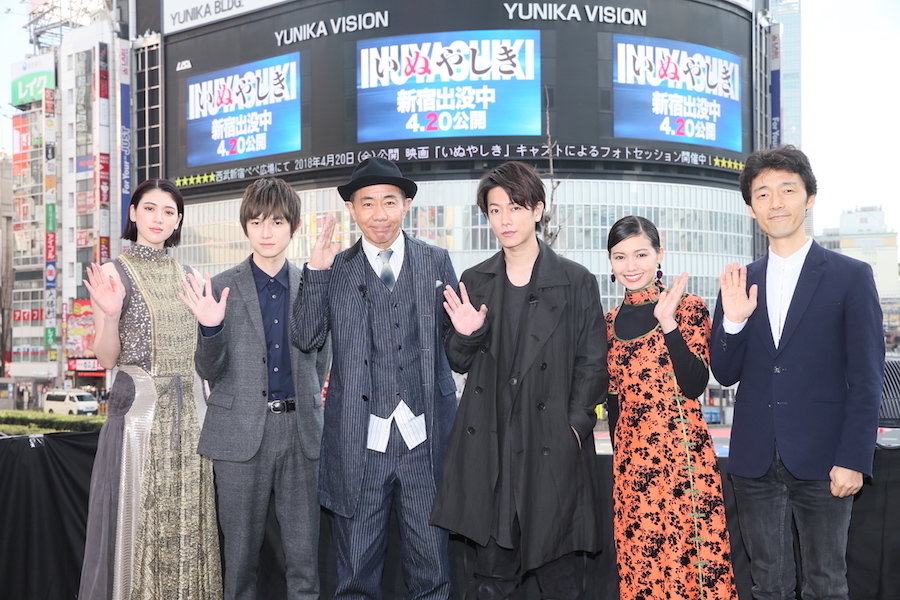 Shouts of joy arose from the surprised crowd as the all-star cast of "INUYASHIKI" made their appearance at the Shinjuku Premium Event.

The all-star cast of movie "INUYASHIKI" (hitting the big screen on April 20th 2018), including Noritake Kinashi, Takeru Sato, Kanata Hongo, Fumi Nikaido, Ayaka Miyoshi, and film director Shinsuke Sato, took part in a special event that was held at the Kabukicho Cine City Plaza in Shinjuku on March 11th 2018 from 3 p.m.
Yunika Vision which also appears in the movie, provided an exclusive live broadcast by linking directly with the Shinjuku Premium Event. After the event, a photo shoot session took place at the SEIBU SHINJUKU PePe Front Square with Yunika Vision in the background.

The "INUYASHIKI" Shinjuku Premium Event took place at the Kabukicho Cine City Plaza which quickly filled up with fans who had won their ticket through a lottery and who had come to catch a glimpse of the all-star cast.
"The event will now start. Please take a look at this video," said the MC giving the cue to start the event.
After the movie trailer of "INUYASHIKI" was shown, the event screen showed Kinashi appearing on the Yunika Vision. "Hello everyone in Shinjuku. I'll be there in a minute," he said. The screen then showed Inuyashiki, the protagonist in the movie, flying over the city of Shinjuku from Yunika Vision to Cine City Plaza. As the countdown reached 0, Kinashi made his appearance by jumping off the stage screen, creating an air of excitement among the audience. 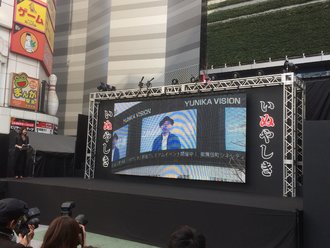 Takeru Sato, Kanata Hongo, Fumi Nikaido, Ayaka Miyoshi, and film director Shinsuke Sato followed Kinashi on stage, starting a discussion about the movie.
As Shinsuke Sato talked about the latest VFX video in which he successfully replicated humans with computer graphics, Kinashi admitted that he wasn't able to tell which one was real. "There was a scene where I thought I'd done a good job, only to be told that it was the computer graphics version of myself who'd done all the acting," he said, making the audience laugh. The event ended once with Takeru Sato saying, "If there were to be a sequel, it could be completed without us doing anything."

20 minutes after the Premium Event and the live broadcast had ended, and as the special version of the movie trailer was being screened on Yunika Vision, the cast suddenly appeared in front of the huge screen. As they waved towards the Plaza, people who noticed cheered and came gathering towards them.
A photo shoot session began with Yunika Vision in the background.
In order to remind people that the movie was set in Shinjuku, Yunika Vision displayed a message saying "Inuyashiki is here in Shinjuku."
The photo of the cast with the people gathered at the Plaza was screened on Yunika Vision, further raising the audience's excitement. Finally, Noritake Kinashi and Takeru Sato thanked the audience and the photo shoot session ended on a high note. 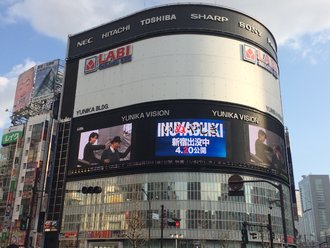 【INUYASHIKI: An introduction】 INUYASHIKI is a "neo-virtual movie" created through the renewed collaboration of Hiroya Oku, the artist behind the hit manga GANTZ, which sold over 20 million copies, and Shinsuke Sato, the director who headed the GANTZ live-action movie adaptation, which grossed over 6.3 billion yen. Noritake Kinashi is cast in the leading role of Inuyashiki, making his first starring feature film appearance in 16 years. In this Inuyashiki, Kinashi engages in live-action wirework, showing us that he can handle not only serious acting, but also action and fight scenes. Takeru Satoh, in his first role as a movie villain, stars opposite Kinashi as the serial killer Shishigami. Satoh portrays an antihero with absolute powers who cold-heartedly engages in mass murder, and uses his outstanding physical abilities to pull off grueling action sequences without breaking character. Kanata Hongo, Fumi Nikaido, Ayaka Miyoshi and Yusuke Iseya are also part of the talent-rich cast. The climactic clash between Inuyashiki and Shishigami takes place in modern-day Shinjuku. The two take their fight to the skies above the city, providing the audience with a fast-paced virtual experience of sweeping freely through skyscrapers and soaring above the crowds on the street. The combination of live footage and computer graphics allows for a detailed and realistic portrayal of the destruction of Shinjuku, while the latest in VFX technology provides the audience with breath-taking scenes of the lead characters pulling mind-boggling weapons out of their bodies to do battle.