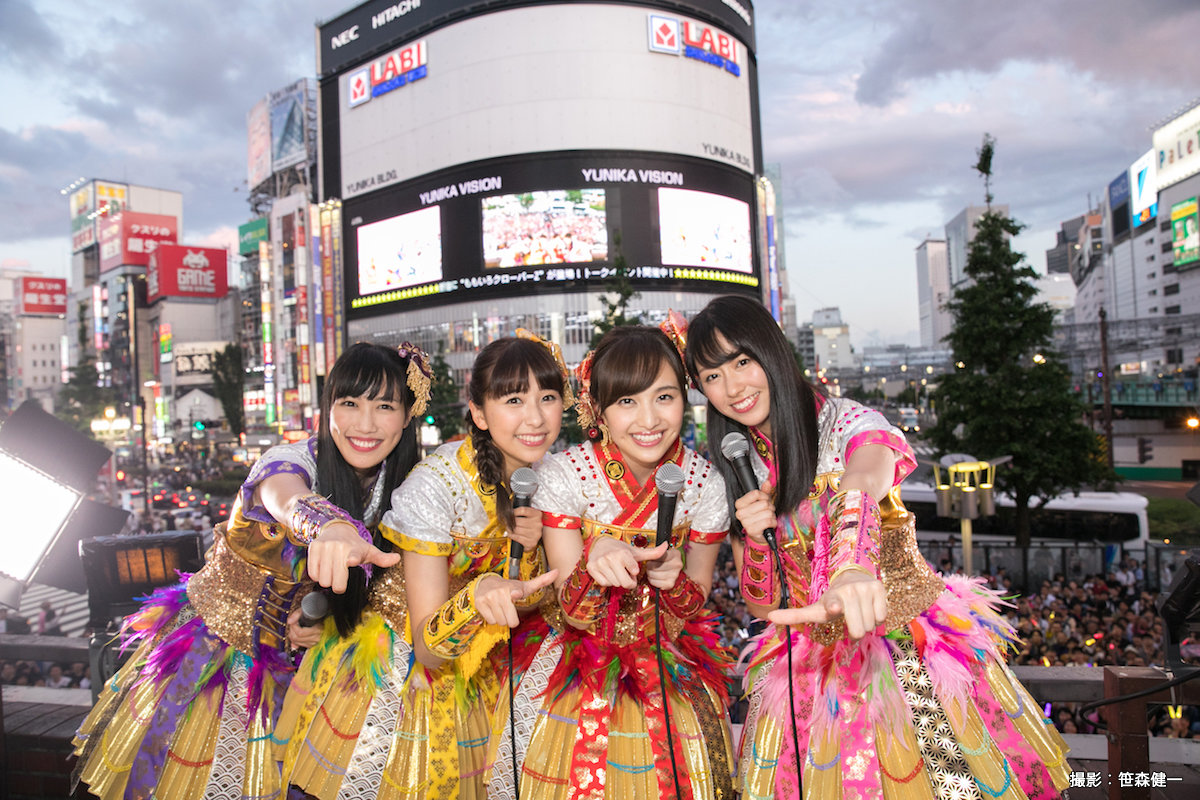 Momoiro Clover Z members appear, causing thunderous cheers to engulf Shinjuku. Momoclo fans are fully satisfied by the special screening, which includes a talk with all the members!

We were held a special screening featuring live footage of MOMOIRO CLOVER Z and talk event of their.
And, that was also available live streaming.

As event staff prepared for the screening around 12 PM, numerous people who looked like Momoclo fans had already gathered at the SEIBU SHINJUKU PePe Front Square, despite being five hours before the start of the event. The level of passion of the fans surprised staff. As the start of the event grew closer, the venue filled with fans dressed in Momoclo merchandise.

The screening started with the group's first single, "Momoiro Punch."
Taken from 2010 when there were still six in the group, the members projected on the VISION screens had a childlike innocence.
As the live footage continued, the group's performances visibly improved, which seemed to make all the fans deeply emotional. As each song ended, the square erupted in applause. 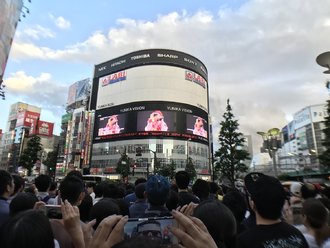 Entering the second half, the screening transitioned to footage of the recent "Momoiro Clover Z 2018 OPENING ～Atarashi Aozora E～" performance at Makuhari Messe.
As soon as "Ikuze! Kaitou Shoujo" began to play, people in the square began to chant, followed by cheers of "Hashire!" that grew louder and louder.
With the enthusiasm in the square steadily rising, you could also see people growing emotional and teary eyed from live footage of Momoka Ariyasu leaving the group. For the last part of the screening, the music video for "Clover To Diamond" played, and the crowd watched the group grow into adults. You could sense a heartwarming feeling in the air, with fans seeming to want to continue watching over the members moving forward. The screening gave a glimpse into the incredible cohesion of the group.

Then, as the screening concluded, the VISION screens switched over to a live broadcast of PePe Front Square, and "overture" suddenly began to play.
"They're here!" The fans attending immediately yelled out to welcome the members. Thunderous applause broke out in the square as the members appeared on the balcony. 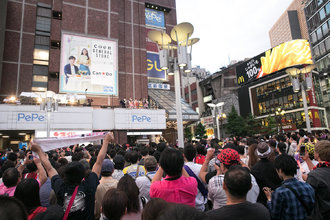 The members greeted the fans with their tagline: "Hello everyone! We are the Weekend Heroines, Momoiro Clover Z!" "To all of you passing through, we're Momoiro Clover Z," said Kanako Momota, waving. People walking on the street stopped to join those in the square, which gradually became more and more packed.
"Wow, incredible," exclaimed Reni Takagi. "They're even waving back from inside McDonalds." (The McDonalds facing SEIBU SHINJUKU PePe has a see-through glass exterior). Without a moment's delay, all the members turned towards McDonald's and did the "Z!" pose. The people inside returned the pose, and, as expected, the venue erupted into a frenzy.

Then an MC joined, and the talk show portion of the event began. The members discussed their thoughts about the approaching 10-year anniversary since forming, and their appreciation for the fans, who had increased since the group's prior guerrilla performance in front of Shinjuku ALTA.
"Thanks to you, we've been able to do this for ten years. Even for us, some of that footage felt nostalgic. I'm so glad we were able to broadcast this in the middle of Shinjuku," commented Shiori Tamai in regards to the evening's screening. Despite being national stars, it was easy to see just how much the group's persistent fan service helps to bolster their popularity.

The members then took commemorative photos with the fans gathered. "So many people came out even though this was a surprise," said Momota as the event came to a close. "We could really feel your love for Momoiro Clover Z." With that, a new wave of cheers erupted from the square. Excitement continued to linger as the incredibly successful screening drew to a close.

According to the official announcement, 4,000 spectators ultimately ended up coming out to the event. The YUNIKA VISION Twitter account, which was live streaming the event, received many comments. "Thanks for the amazing setlist. It did a great job showing Momoclo's development," read one. And, "That was a fantastic event. The crowd was really feeling the joy of the group." It seems like this was a really satisfying event for the fans.