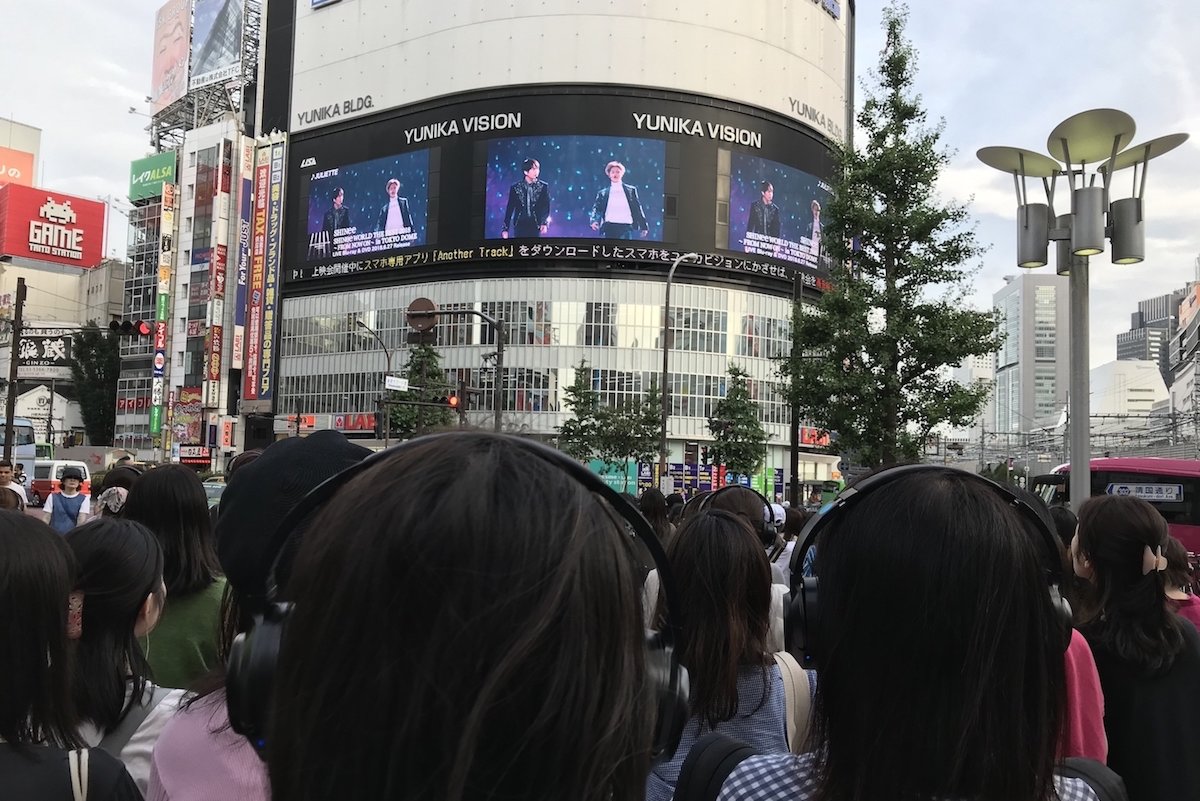 Fans once again gather in Shinjuku. SHINee's screening fills the air with a sense of euphoria.

SHINee had a previous screening at YUNIKA VISION this April when their greatest hits album was released, so when the announcement of this screening was made, many people on social media responded with comments such as "They're here again! YUNIKA VISION!" and "I really want to go!"

It seems that YUNIKA VISION is well known among SHINee fans. Coinciding with the busy activity on social media, on the day of the event, small groups of fans began to appear, waiting at the venue for over an hour before showtime. The fans were likely coming early to get the best position to view the live performance video, as they seemed to understand the layout of YUNIKA VISION's three special screens (footage from different perspectives plays on three screens, and all screens link together to create a single image).

Despite being a mid-summer day with temperatures exceeding 30 degrees, many fans came to the screening. As enthusiasm in the SEIBU SHINJUKU PePe Front Square venue grew and grew, the screening began.

The live performance video started with Stranger, followed by Everybody and Evil. At first, only a few people seemed to notice the sound quality of the headphones and the surrounding environment. As the screening continued, everyone began to gaze intensely at the VISION screens, and some people started moving naturally to the rhythm. After the 5:00 PM screening ended, even more fans gathered at the square, leading up to the 7:00 PM screening. There were people filing in at the last minute from work, and they looked disappointed to discover that the limited 100 sets of headphones had already run out. But a staff member informed them of the Another Track app, where they could listen to high quality audio. This seemed to satisfy everyone. As the screening continued, the square began to feel like a live venue, and more and more people began to sing along with the members on the VISION screens. Together, the attending fans spread a sense of shared joy amongst themselves.

Many fans also watched the screening's live stream. On Twitter, there were many comments flying across the screen. "I can't stop watching this now that it's started. LOL." "SHINee is the best! SHINee WORLD is the best! YUNIKA VISION is the best!" Once the screen finished, even more comments were posted. "That was so fun." "I'm glad I was able to watch it with everyone! See you next time!" The screening really felt like a SHINee event, creating a strong bond between the members and the fans.