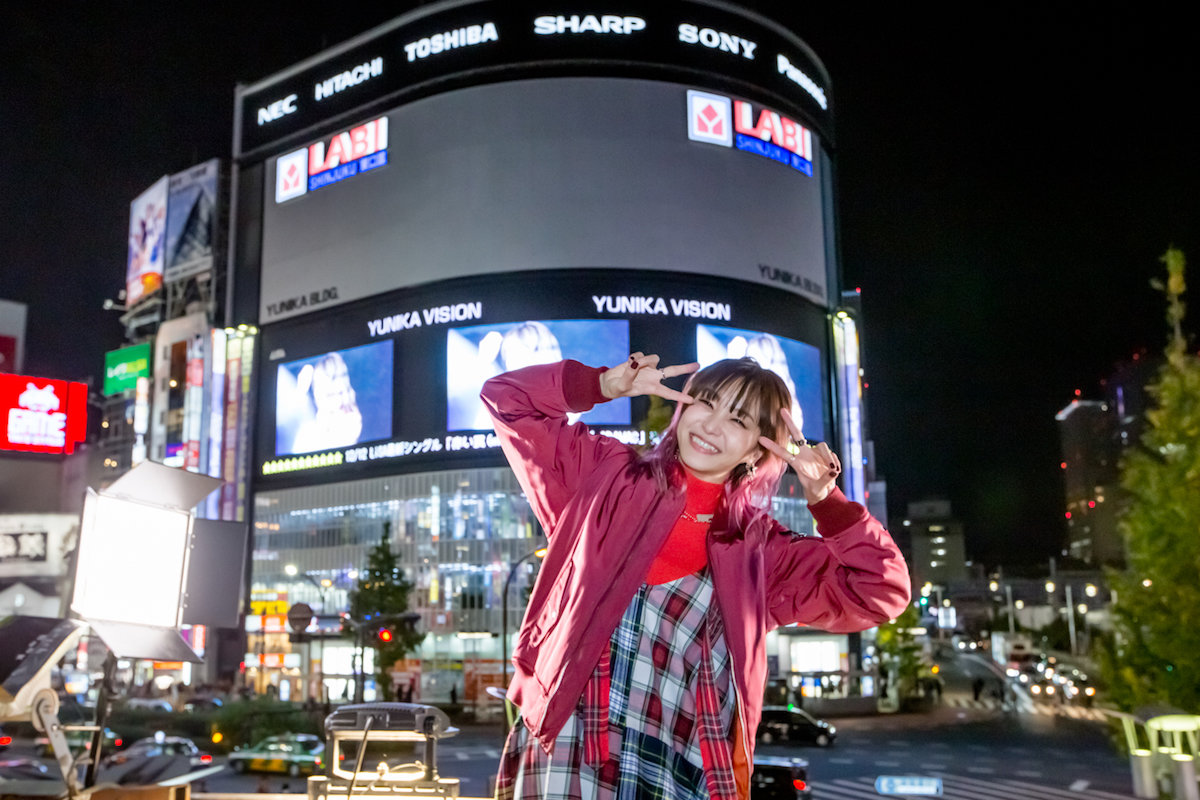 The initial music video reveal and talk event for LiSA's new song caused thunderous applause to arise when she appeared.

LiSA had held a riddle contest called "Nanatsu no Akai Wana" on Twitter over the previous week for the event. One hint was posted each day, bringing a strong reaction from her followers every day. On the second and third days, there were sharp people who guessed, "I wonder if YUNIKA VISION is going to show her music video," and a large group of fans gathered in Seibu Shinjuku PePe Plaza on the day of the event after solving the riddle of her wonderful tweets.

At 19:00, when LiSA was shown magnified on the VISION screen, everyone stared intently at the screen. With long black hair and an enchanting figure that differed from how she looked before, the gathered audience seemed fascinated by the cool musical video that also had LiSA's typical stylishness that matched the upbeat song.

After the music video, LiSA appeared with the words "Are You Ready!?" This caused PePe Plaza to erupt into thunderous cheers.
She gave a greeting, saying "Hey everyone in Shinjuku! I'm LiSA!" and then started talking with the MC.
Talking about the themes included in the music video, she then explained the reason for the contest, saying "Isn't this music video so cool!? (more large cheers from the plaza) With such an awesome music video, I thought it would be a waste to just release it normally, so that's why I came up with 'Nanato no Akai Wana' to celebrate it with everybody in style!"
In addition, LiSA also appeared to enjoy the response from fans. "Who here read the riddles on Twitter every day?" to which almost everyone raised their hands. "When I saw tweets saying 'It's Shinjuku, right? I bet YUNIKA has something to do with this,' I really wanted to quote it but didn't want to ruin the contest, haha."

LiSA had fun with fans, always calling out to them in the square when it was time to take a commemorative photo with everyone who had gathered there.
The event was also shown on LiSA's TwitCast, where you could see her being excited with fans and always thinking about them.
With the closing remark, "Today was such a good day!" the music video for "Akai Wana (who loves it?)" was played once again on the VISION screen. She watched it together with the audience, and at last said "Thank you~!", ending the successful event with words of thanks without a microphone.

On LiSA's TwitCast, there were many comments from those who could not go to Pepe Plaza and enjoyed the broadcast as much as those who were there, saying "The guerilla event was the greatest" and "The music video was so cool. Thanks for showing it."