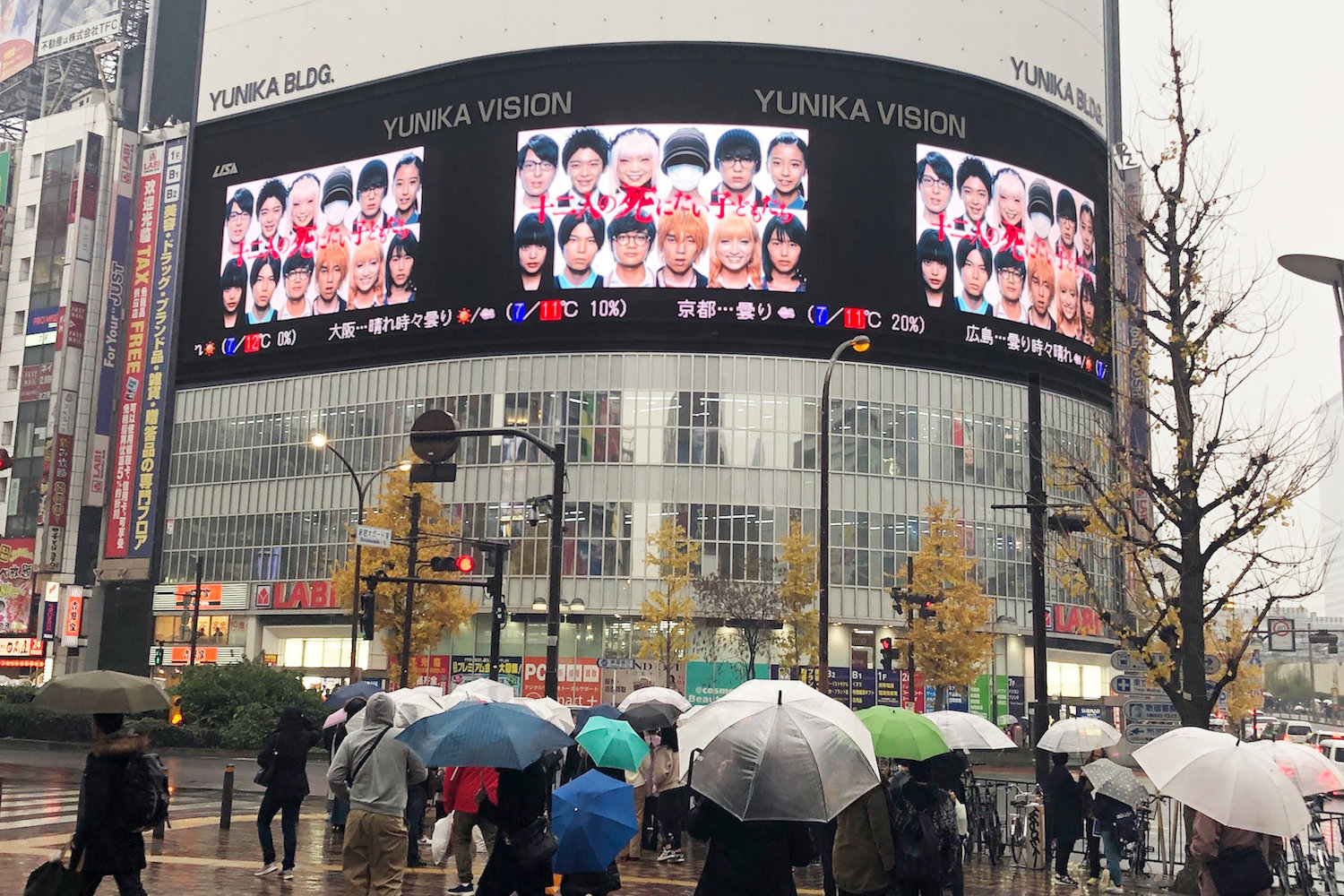 Who is "No. 4"!? The last member was revealed on the large Yunika Vision screens in 3 cities.
Special footage that could only be seen there was also broadcast.

Sunday, December 23rd, 2018 at 16:00
There was an event to simultaneously announce the identity of "No. 4", the last of the 12 major cast members to be hidden from the movie "12 Suicidal Teens" (released on January 25th, 2019), on the large Yunika Vision street screens in Tokyo, Osaka and Fukuoka.

The movie "12 Suicidal Teens" starts with 12 teenagers who meet in an abandoned hospital to arrange a suicide pact, but then discover the dead body of a 13th person that is still warm...
11 of the 12 cast members had been revealed in November 2018, but only No. 4, named Riko Akikawa, was hidden with a knit cap and surgical mask.

Then in December 2018, the "Guess Who No. 4 is?" campaign to guess the actress playing No. 4 was announced.
Because you could get the chance to be invited to the premiere through a lottery by making a tweet with the hashtag #4番は誰 (#WhoIsNo4), there was a lot of excitement with posts on Twitter predicting the cast member.
In addition, it was announced that the answer to the campaign would be shown on the large Yunika Vision screens in the 3 cities of Tokyo, Osaka and Fukuoka simultaneously, and special footage would also be broadcast that could only be seen when the final member was revealed.

On December 23rd, although it seemed like it would rain, many fans gathered to see the special footage in front of Yunika Vision.
The figure of "No. 4" was shown on the Yunika Vision screens at 16:00 for the great reveal, and when the knit cap and mask were removed to show Kanna Hashimoto, the crowd that had gathered cheered.

There were many posts on Twitter even after the campaign was over saying things like, "#4番は誰 I knew it was Kanna Hashimoto! Now I want to see the movie even more!" and Kanna Hashimoto herself also said, "I was nervous. It would have been painful if everyone was disappointed when they saw my face... But, because it was done this way, it seems like everyone got excited about it on social media, so it made me very happy".

She will appear with other popular young actors and actress including Hana Sugisaki, Mackenyu Arata, Takumi Kitano and Mahiro Takasugi, and it is directed by Yukihiko Tsutsumi, who also directed the movies "SPEC" and "Initiation Love".