Takuya Kimura descends upon Shinjuku! Yunika Vision's take-over event rumbled with the cheers of 2,000 people at the appearance of the man himself.

On Wednesday, January 8, 2020 at 15:30 in front of Yunika Vision, a special video available only that time and place was broadcast, and an event was held where Takuya Kimura himself made a surprise appearance.

On the day of the event, which was also the release date of Takuya Kimura's first original album "Go with the Flow", a large number of fans gathered at Seibu Shinjuku's PePe Plaza as a video that could only be seen there was broadcast.

There was a round of applause when Takuya Kimura was shown on the Yunika Vision screens at 15:30, and his fans stared at the screens as the music videos (short versions) for "Sunset Bench" and "One and Only" from his album were played. 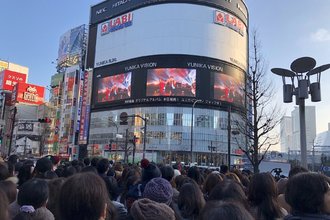 In addition, a commentary video by Kimura was shown after the music videos, and in the Vision screens he said, "Me on the screens is pre-recorded... but where am I now? Turn around and look everybody", to which they looked back and saw Kimura himself.
The fans cheered in the square at his surprise appearance, passers-by stopped one after another, and the area in front of Seibu Shinjuku Station grew increasingly crowded.

Kimura stood on a balcony above PePe Plaza and greeted the crowd: "To everyone going through Shinjuku and to everyone gathered here. My name is Takuya Kimura and I have released a solo album".
He continued, saying, "I've just finished recording a radio program with Noriyuki Makihara, but I've really made it up until now with the great amount of help I have received. I'm truly grateful". He left after giving many words of thanks to his fans.

Free tabloids were also distributed nationwide including in Shinjuku's PePe Plaza on that day, and some people who answered a quiz had the chance to win original merchandise. 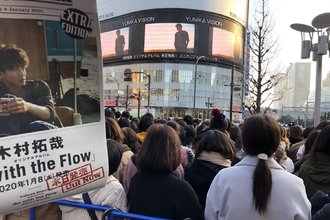